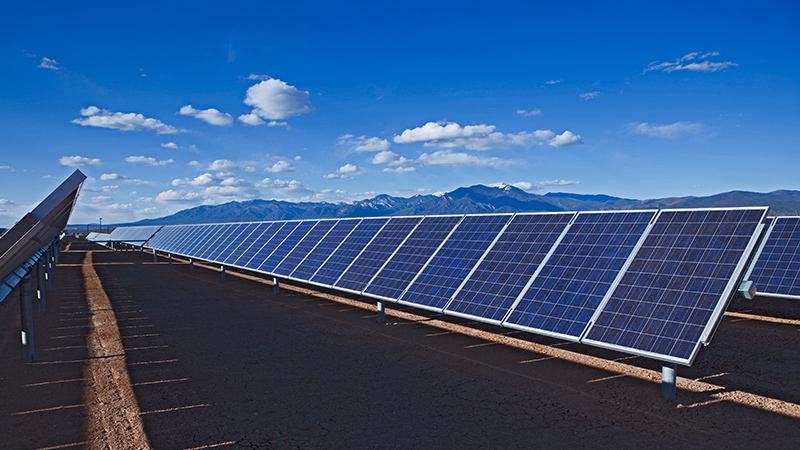 Western Resource Advocates’ vision for New Mexico was always a state powered by clean energy, but the path forward has been complicated. The largest coal plant is located in the Four Corners region, an economically disadvantaged but fossil fuel-rich part of the state that encompasses part of the Navajo and Jicarilla Apache nations. The potential for renewable energy development there was large, but transitioning from coal would affect jobs, and require a significant change in political will, as well as a mindset shift about energy development.

Fast-forward through years of legal and political advocacy by WRA and many others: The San Juan Generating Station is now on a path to closure. This past July—in the midst of the pandemic shutdown—the New Mexico Public Regulation Commission unanimously approved a suite of renewable energy investments, including major solar energy development on Jicarilla Apache lands, to replace the energy and jobs the coal-fired plant provides.

The projects will invest over $1 billion in the local school district and create 1,200 multi-year construction jobs in the Four Corners area.

The decision was a major victory after years of work by WRA and partners, and it will help transform the region’s economy.

“This vote was a historic step forward in our efforts to diversify our state’s economy by acting on climate,” said Pat O’Connell, WRA’s senior clean energy policy analyst in Santa Fe.

It also helps ensure that New Mexico will meet the goal of its landmark clean energy law, the 2019 Energy Transition Act, which requires public utilities to produce energy from 100% carbon-free sources by 2045 and all of the state’s utilities to achieve 100% clean energy by 2050. The requirement is one of the most ambitious in the country.
Change in the Four Corners area began many years ago when Santa Fe-based attorney Steve Michel, deputy director of WRA’s Clean Energy Program, started working to reduce pollution from the San Juan plant. Meeting the goal often seemed impossible. The coal plant, which opened in the 1970s, is a fixture in the region. At one time, its four units emitted 13 million tons of carbon dioxide a year, making it one of the largest sources of pollution in the region.

WRA’s argument that a just transition from coal to renewable energy was economically better for ratepayers and the utility ultimately led to the regulators’ vote this summer for solar energy. In 2015, WRA entered into a legal settlement that allowed for the closure of the first two units at San Juan. The ETA’s passage enabled the remaining two units to close, and this January, the state Supreme Court confirmed that state regulators must carry out the law.

New Mexico is still heavily dependent on fossil fuel development and has a long way to go to reach the level of carbon pollution reductions that scientists say are needed to avoid the worst impacts of climate change. But the ETA, the scheduled closure of San Juan, and the new investments in solar energy and battery storage are major progress.

While WRA’s legal and policy advocacy played a central role, the success of the ETA and the solar energy transition has come thanks to an extensive coalition of supporters that includes conservation, business, and labor groups, as well as faith leaders, and community-based advocates, including the Native American Voters Alliance Education Project.

“We worked hard to build a diverse coalition, composed of a wide variety of stakeholders. It was important to us to ensure that all who would be impacted by the ETA had a seat at the table,” said Sanders Moore of Policy Solutions Institute, who is a WRA consultant.

As the ETA is implemented, its benefits will grow. “It will mean a big paradigm shift,” O’Connell said. “It will accelerate the move toward renewable energy.” The West is on the Ballot Helping Farmers While Keeping Water in the Colorado River